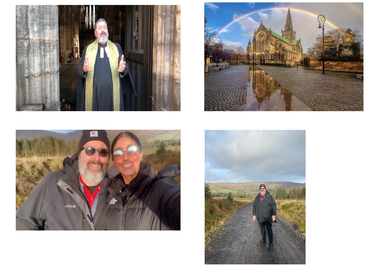 Revd Mark E. Johnstone
Mark Edward Johnstone DL, MA, BD was born in Glasgow in May 1968 and schooled in Glasgow, Cleddans and Kingsridge in the peripheral housing scheme of Drumchapel. During this time Mark was awarded the McClure Trophy for good citizenship and a city-wide award for youth. He served two consecutive years as School Captain.
During his teenage years Mark was involved in the local Church, Drumry St Mary’s.  He developed a Scripture Union Group, Youth Fellowship (Wayfarers) and was very involved in the Church Drama group, competing in the Pollok Drama Festival for one act plays.
He attended Glasgow University, achieving a Master of Arts in Social Sciences, graduating then gaining a Bachelor of Divinity Degree.  As a candidate for the Ministry of the Church of Scotland Mark served as an assistant at Old Partick Parish Church (Rev John Jolly), Dennistoun Central Parish Church (Rev John Beck) and Wellington Parish Church (Rev Leith Fisher). During the Summer he worked with Rev. Derek Haley at Gartnavel Royal Psychiatric Hospital. Mark served his probationary year at Springfield Cambridge Parish Church in Bishopbriggs (Rev Bill Ewart).

Mark is married to Audrey.  They have three adult children.

Mark was first ordained to the Ministry of the Church of Scotland in 1993.  He was ordained and inducted to Denny Westpark Parish Church, Falkirk.
While in Falkirk, Mark was appointed Chaplain to Belsdyke, Stirling and Falkirk Psychiatric Hospital. This led to Chaplaincy at Strathcarron Hospice where Mark worked alongside Rev. Stuart Coates (Scottish Episcopal Church). Mark also taught a component for the Bachelor of nursing degree at Glasgow University — Spiritual wellbeing in palliative care.
In 1999 Mark was called by Northminster United Church in Toronto Canada.  This was in the North York, Willowdale area of the city.  There were opportunities to work in a multi-cultural setting.

In 2000 Mark was invited to take up the Church of St Mary’s Kirkintilloch. He served this charge for 18yrs. During this time, he was appointed as a Deputy Lieutenant for the Country of Dunbartonshire.

Further to this Mark served the Church nationally as a Trustee.  He also served as the Convener of the Mission and Discipleship Council of the Church of Scotland. This involved management of the Life and work magazine, St Andrew press, The Scottish Story Telling Centre, Elder Training, the development of Sunday school material, The Theological Forum and many other aspect of the Church of Scotland. Mark has served as the Convener to the Presbytery of Glasgow’s Business Committee.  He has chaired the Board of Directors of Lodging House Mission. During this time, he took responsibility for the ‘Well’ multicultural project on the South Side of Glasgow.

​In 2019 Mark was invited to take up the charge of Glasgow Cathedral. He was Inducted during April 2019. This post has allowed Mark to serve the congregation, become increasingly active in Civic life and accept the additional chaplaincy responsibilities to many of the City of Glasgow’s historic institutions.